Author visits promote literacy, engagement in the world, and a life-long love of reading and learning. Students meet writers "up close and personal" as they share their passion for the written word and their journeys as writers.

"Julissa Arce is best selling author, political commentator, speaker, writer and author of "My (Underground) American Dream". She is a contributor for CNBC and Crooked Media. Her writing has been featured in CNN, The Hill, Refinery29, CNN en Español, and Fusion among other national outlets. She is a leading voice in the fight for immigrant rights and education equality. She is the chairman, and co-founder of the Ascend Educational Fund (AEF). AEF is a college scholarship and mentorship program for immigrant students in New York City, regardless of their ethnicity, national original or immigration status. She made national and international headlines when she revealed that she had achieved the American Dream of wealth and status at Goldman Sachs while undocumented. Julissa will use her inspirational story to change the conversation around immigration in MY (UNDERGROUND) AMERICAN DREAM. The book explores the polarizing question: for an undocumented immigrant, what is the true cost of the American dream?

In the heady days of the most astronomical stock-market rise in Wall Street history, Julissa Arce climbed the corporate ladder--a rare Hispanic woman in a sea of suits and ties. In 2005, against all odds, she landed one of the most coveted jobs as an analyst at Goldman Sachs. Over the course of the next six years, even while the financial markets crashed, she continued to climb the corporate ladder--riding a series of promotions to become a Vice President, complete with a high six-figure salary and all of the perks that come with living the Goldman Sachs life. What none of her colleagues knew was that she wasn't just a young woman who broke through ceilings in a cutthroat male-dominated field: she was also an undocumented American from Mexico. 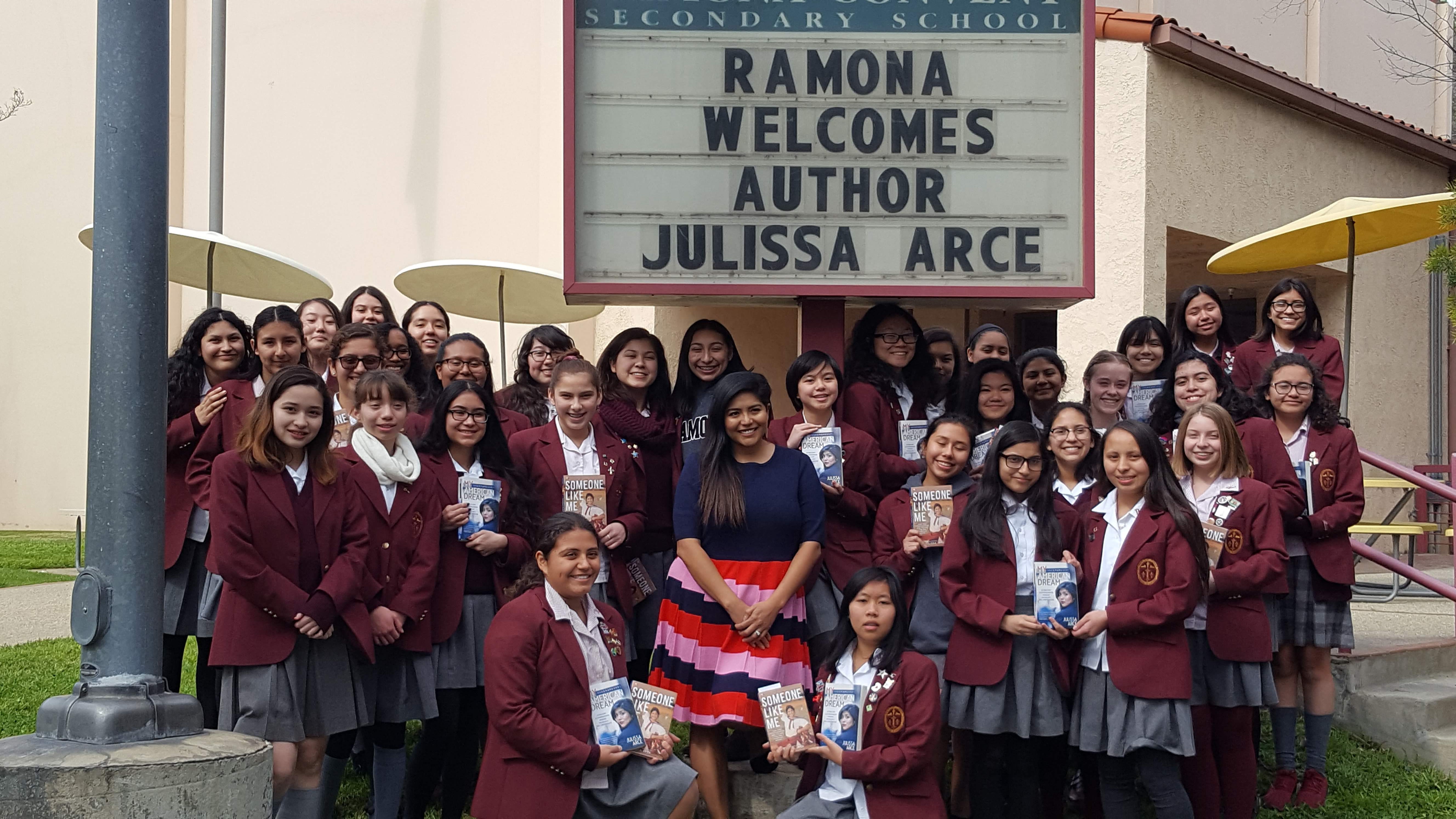 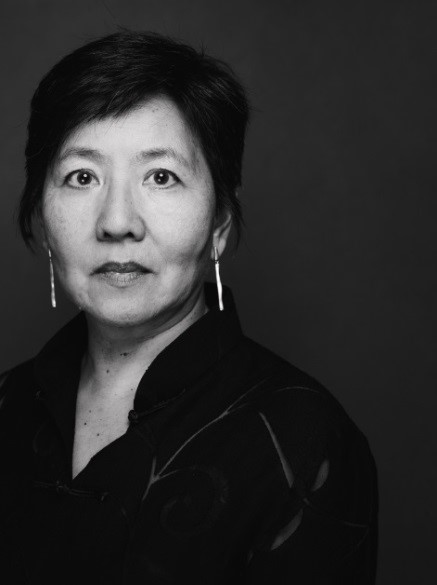 (Ramona Convent Secondary School, Class of 1977) will be traveling from the Netherlands to join us on Thursday, October 19th! She will speak to classes about her fascinating life journey and her passion for the written word.

With the recent publication of her highly acclaimed debut novel, The Dancing Girl & the Turtle (2017), Karen Kao has come full circle.According to Ms. Kao, her love of writing and poetry was set into motion at Ramona. She went on to study English at UC Irvine, where one of her teachers, Charles Wright (U.S. Poet Laureate 2014-2015) inspired her to become a writer; and, her friend, Yusef Komunyakaa (Pulitzer Prize winning poet), published her poetry.

"During a lifetime in the law, I have used words to forge alliances, mold opinions and manage expectations. My new challenge is to use my words to create: beauty, emotion and truth. Karen Kao

Following her father's advice, Ms. Kao earned a law degree and practiced law in Washington, D.C.She fell in love, married a Dutch man, and moved to Holland; where she immersed herself in the culture, learned the language, and returned to school to obtain her Dutch law degree! Karen eventually became a partner and head of the corporate law department at an Amsterdam-based law firm. Her area of expertise was cross-border mergers and acquisitions, a field of law that requires hard-nosed negotiating skills and an ability to survive on very little sleep. In 2011, she ended her 25 year stint as a high ranking lawyer and embarked upon a third career: a return to her love of writing and the stories she heard as a child about Old Shanghai."-inkstonepress.com 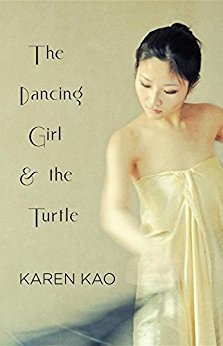 The Dancing Girl & the Turtle (2017), is a powerful and thought-provoking novel set in Shanghai, China (1929 to 1954). "Song Anyi is a rebellious young woman determined to live on her own terms. She's stymied by the old-fashioned ways of her brother Kang, the illicit desires of her cousin Cho, and the war with the Japanese. There is violence in this novel, just as there is violence in the lives of more women than we'd like to think. Some of it is self-inflicted; very little is deserved. Anyi is the voice of every woman denied a place at the table and every girl whose shame led her to self-harm."-- Karen Kao,http://inkstonepress.com/karen-kao-published-works...

Helie Lee, author, speaker and documentary filmmaker, is the author of Still Life with Rice and In the Absence of Sun, memoirs in which she chronicles her family's experience in war-torn Korea from the 1930s to 1997. In the Absence of Sun specifically details her risky attempt to rescue her uncle from North Korea.

Born in Seoul, Korea, Lee's family immigrated to America when she was four. After graduating from UCLA with a degree in Political Science, she sojourned back to her birth country to rediscover her roots. When she returned to the U.S., Lee began writing her first book while working on such shows as In Living Color, Saved by the Bell, and The Martin Lawrence Show.

Her inspiring presentation illustrated how the hopes, struggles and sacrifices, unconditional love, and determination of three generations of her Korean-American family gave her the “wings” to fearlessly create her own path and make a difference in this world.

In anticipation of her visit, Book Club members read Ms. Lee’s memoirs; and, drama students, under the direction of Ms. Tracy Clavin, wrote and performed original one-act plays based upon themes from Still Life with Rice.

"I was inspired by her humility and genuine passion. I will never forget her stories or her inspiring motto:'I can! I will! Just watch me!'"
Starla M. '20

Helie Lee encouraged Ramona students to celebrate their cultural heritage and to learn their family history. As a world-renowned advocate for the rights of immigrants and North Korean refugees, Ms. Lee also advised students to continue informing themselves and others about the humanitarian crises that exist in our world today. 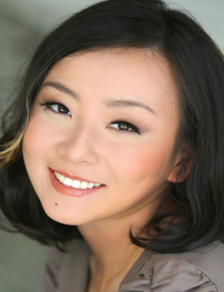 Marie Lu - Best-selling young adult novelist Marie Lu captivated her audience by recounting events in her life that fueled her creativity and resolve to become a writer. According to Mrs. Angelica Seager, Science Department Chairperson, “Her message of persistence was inspiring.”

“Marie Lu is one of the most inspirational women I’ve met in my life. Although her manuscripts were initially rejected by publishing companies for a decade or more, she kept the spark of her dream and drive alive. It was her persistence and creativity that got her to where she is today. She is a living example of the joy that comes from following your dreams and living your life to your fullest potential, or as Ms. Lu herself said, ‘YOLO! You Only Live Once!’”
Kathleen 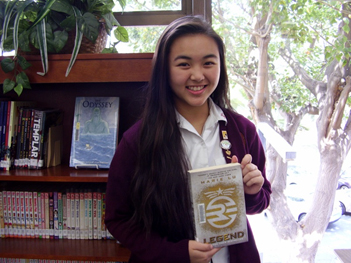 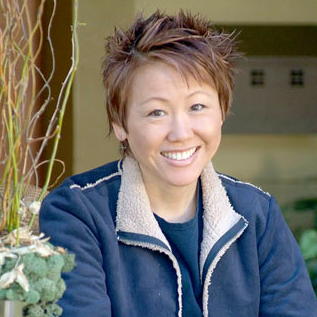 Best-selling young adult author and humorist Lisa Yee is a friend of the Ramona community.

At her last visit, Ms. Yee focused her presentation on the theme of bullying in honor of International Anti-Bullying Week. Ms. Yee discussed her work and inspirations, including the young man who wrote to her about his own experiences of being bullied (and who became the inspiration for the main character, Marley Sandelski, in her acclaimed novel, Warp Speed.) Ms. Yee also read and discussed her essay, "Regret," which was featured in Dear Bully: 70 Authors Tell Their Stories. Students and guests had the opportunity to meet Ms. Yee and to have their books signed by the author after the presentation. 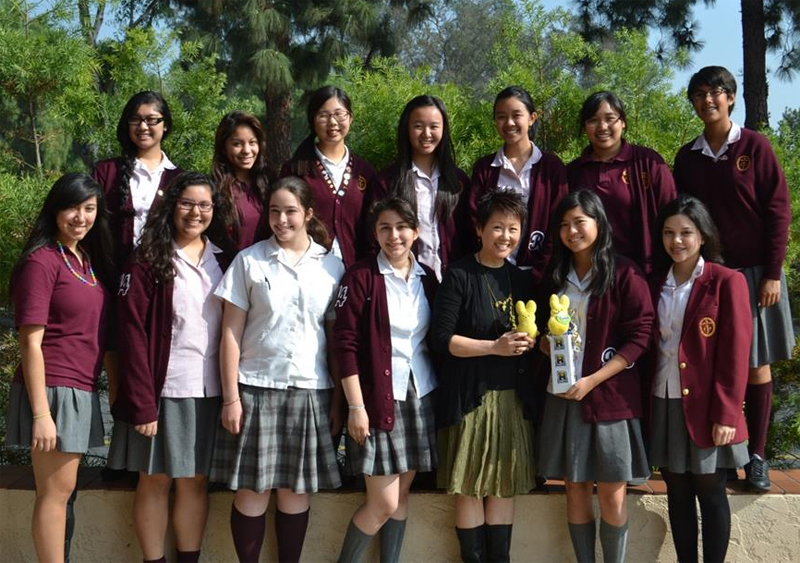 A school-wide follow-up discussion led by students and a "We're Better Without Bullying" creative writing contest were spearheaded by our Librarian, Mrs. Tegtmeier. 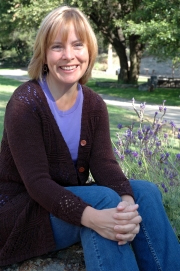 Author and humanitarian Margaret Trost, the founder of the What If? Foundation, shared her story of charism and hope, that is chronicled in her profound book On That Day, Everybody Ate: One Woman’s Story of Hope and Possibility in Haiti.

Margaret Trost discussed the journey that led her to Haiti and to starting a food program that now serves meals to thousands of hungry children in Port-au-Prince each week. Mrs. Trost and her visit hosts, Mr. and Mrs. Tom Honore', conducted follow-up discussions in the Library following her school-wide presentation. The entire school community was gifted with a copy of Mrs. Trost's acclaimed book, and a donation to help the the What If? Foundation was presented to Mrs. Trost, thanks to the generosity of a SNJM Charism Grant. 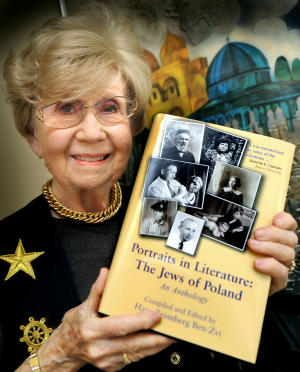 Students learned the story behind her memoir Eva's Journey: A Young Girl's True Story and about Eva Bromberg… a courageous young girl who escaped death and discovery by the Nazis while on her own for four years in German-occupied Poland during World War II. 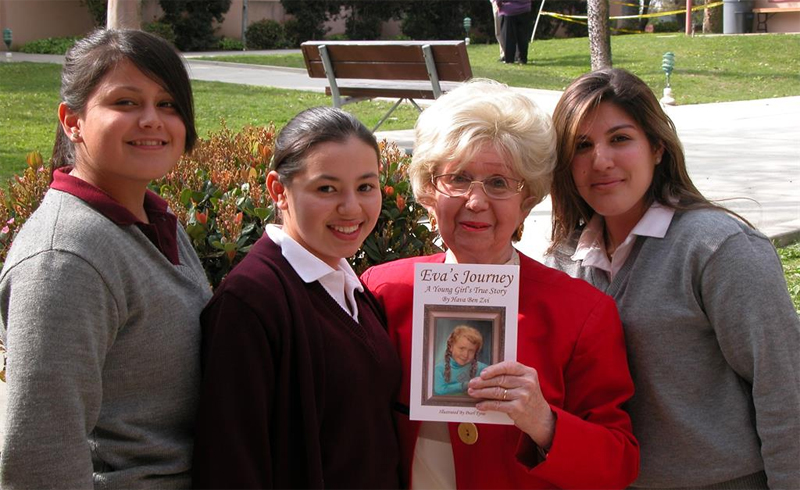 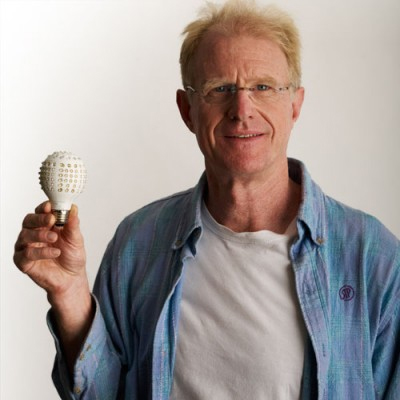 Author, Emmy-nominated actor, and environmentalist Ed Begley, Jr. shared his insights and books on the subjects of sustainability, environmentalism, and conservation.

Following his informative and impassioned presentation, students, teachers, parents, and community members had the opportunity to meet Mr. Begley and to have their books (Living Like Ed: A Guide to the Eco-Friendly Life and Ed Begley, Jr.'s Guide to Sustainable Living) signed by the author. 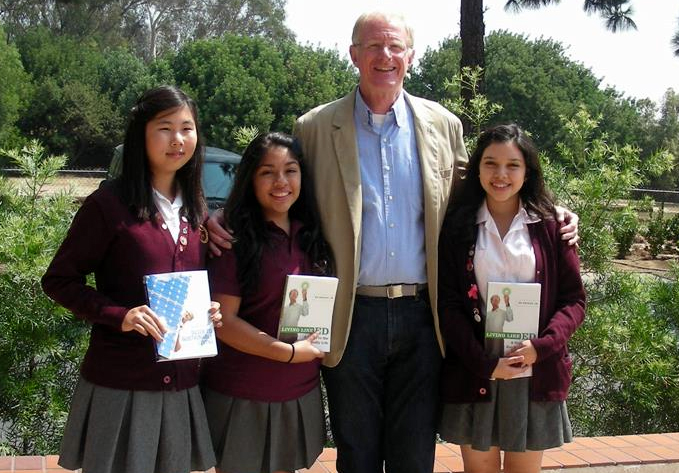 Members of the Ramona Roses and the Book Club surprised Mr. Begley by leading the entire audience in singing and wishing him a Happy Birthday! 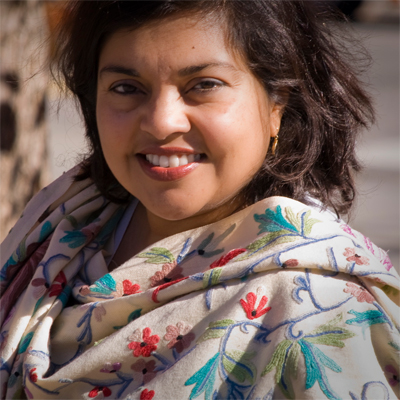 Ramona had the pleasure of welcoming acclaimed multicultural writer Mitali Perkins who focused on the theme of "living between cultures."

"After studying political science at Stanford and public policy at U.C. Berkeley, I taught in middle school, high school and college. When I began to write fiction, my protagonists were often—not surprisingly—strong female characters trying to bridge different cultures."

Mitali Perkins' stories of her immigrant background and the role that family, friendship, and fortitude played in her personal story resonated with many. She encouraged students to keep reading and learning; to write their own stories; and, to share their voice, their words, and their talents.

Members of the Book Club discussed Secret Keeper over a delicious lunch of vegetable samosas, chicken curry with basmati rice, and naan. Group members also wrote and shared how they envisioned the lives of the main characters 20 years later. What do you think happened to Asha, Reet, and Jay? 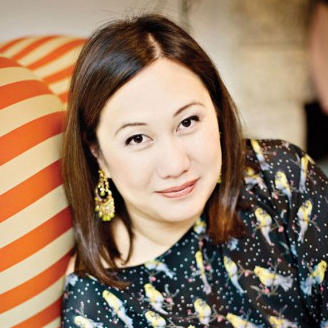 New York Times best-selling author of books such as the popular Blue Bloods and The Descendants series, The Ashleys, and the Au Pairs, Melissa de la Cruz, visited Ramona and shared stories of being a private, all-girl school student and of her journey to becoming a popular YA author. 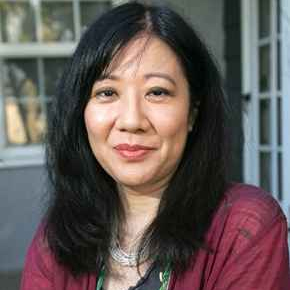 When not writing or conducting book talks, Evelyn Gonzalez spends her time with her other love-- being an elementary school teacher (for over 25 years). She is the mother of two young adults, and she is excited to share her “new baby”-- her debut YA novel, The 16 Rule, with readers around the world. She enjoys “encouraging other writers to pursue their dreams.”

Meet Mrs. Gonzalez and get your book signed by her on Wednesday, January 10th at our Author Assembly!

“Fifteen-year-old Lucy Aceves lives in a cultural tug-of-war. She wants nothing more than to live a normal American teenage life. Lucy attends summer school for one reason only... to meet a boy. When seventeen year-old Evan Ellis catches her eye, she becomes obsessed with finding out as much as she can about him. She plots and schemes to gain his attention by wearing clothing and make-up her parents do not approve of. Lucy has never defied her parents; but, when her father's disapproval and lack of trust hinder her ability to keep her secret, she is ultimately faced with a difficult decision:Should she continue to sneak around behind her parents' back and suffer the consequences if she gets caught? Or should she obey their ‘Sixteen Rule’ (and Latin beliefs and expectations) and gain back their trust?”