Paid in full enrollments qualify for our “EARLY BIRD SPECIAL"

Camp Ramona is a fun-filled summer day camp for boys and girls entering 1st through 6th grade. Camp is hosted on the lush grounds of Ramona Convent Secondary School, centrally located in Alhambra, CA. Safely nestled within this gated campus, Camp Ramona offers a safe and secure environment for kids to learn, explore and play. The grounds include a swimming pool, gymnasium, picnic areas, game field, gentle hills for hiking and lots of trees. 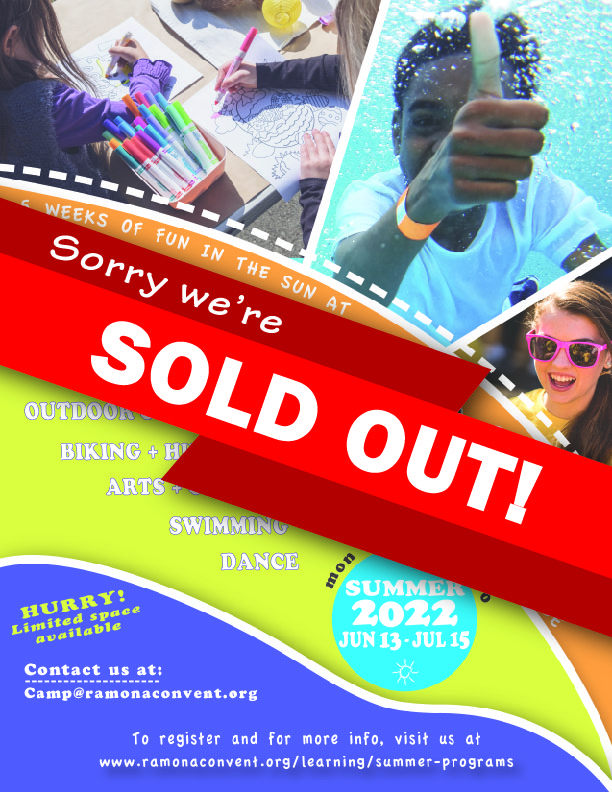 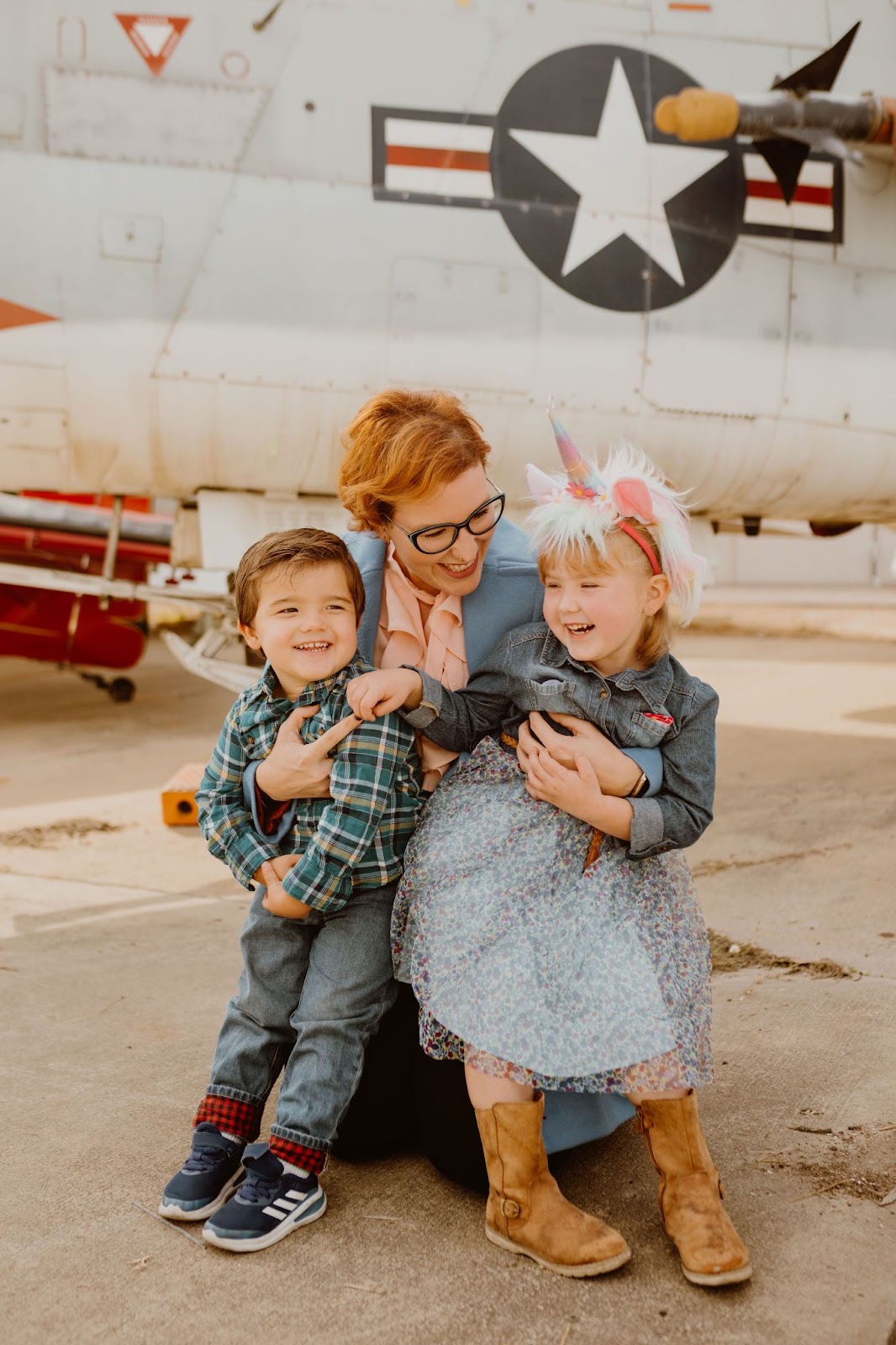 Sindie is excited to put back on her Camp Director hat. She spent last summer directing an innovation camp for kids in Altadena and returned home to Ramona in the fall to teach Physics, AP Computer Science and moderate the Robotics Club. When she’s not wearing silly hats and socks at camp or fostering curiosity in her students, Sindie plays camp director to her two small kiddos Leona and Luke, and continues her flight training as a student pilot.

“I’m so excited to continue this wonderful adventure here with Camp Ramona. There’s nothing quite like the summers we spend as kiddos outside in the sunshine, and I’m looking forward to helping create those cherished memories with our campers and staff.”

Carly is returning to Ramona Convent, as this year's Co-Camp Director.

Growing up a teacher's daughter, Carly has many years experience volunteering and tutoring in kindergarten classrooms. Over the last several years, her inner artist has led her to a career in Visual Merchandising, working for companies like Nordstroms, American Eagle Outfitters and Pottery Barn. Currently she resides in San Diego, CA but is over the moon to begin her summer residency back at Ramona.

"It's great to be back! Ramona is a really special place and it had such a positive influence on who I am today. This summer, I'm really looking forward to continuing to provide a fun, creative and expressive environment for our campers."

Special welcome to our Dance instructors, Frit and Frat! 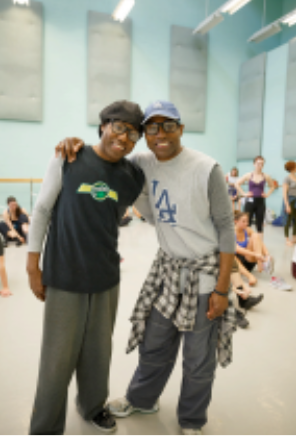 Collectively holding BFA and MFA degrees, Frit and Frat have co-hosted KCAL 9 TV’s “9 On the Town,” appeared on “Extreme Fake Over” for Pax TV, and have been in numerous films and commercials. They are the Artistic Directors for the Los Angeles based KIN Dance Company, who has performed at many venues throughout Los Angeles, Nationally and abroad, including the McCallum Theatre in Palm Springs, the Cowell Theatre in San Francisco, the Prince Theater and Painted Bride Theatres in Philadelphia, and the Linhart Theatre and Michael Schimmel Performing Arts Center in New York.

Frit and Frat have worked all over the World and have performed & choreographed for several stage and television productions, including “21 Stories,” which was performed live in Los Angeles and New York, "Flirting with Morty" (NAACP and Ovation Award nominee), the fresh,funky and bold “UniverSoul Circus” National & International tours, and HBO & PBS specials. In addition, they are the Producers/Directors & Choreographers for the “Mrs. America” and “Mrs. World” Pageants, and have directed and choreographed Vox Lumiere's "The Hunchback of Notre Dame" National & International tour.

Frit and Frat are the Associate Choreographers under legendary Broadway and film choreographer, Julie Arenal, for “Much Ado About Nothing,” performed at the Kirk Douglas Theatre in Los Angeles and “Timmy the Great,” performed at the Theatre For The New City in New York. They are currently the Assistant Choreographers for ‘HAIR” the Musical at The El Portal Theatre in Los Angeles (NoHo), and have choreographed for several Dance Companies, Theme Parks, and as Guest Artists at many schools, colleges and Universities, including the National Institute of the Arts in Taiwan and Pineapple Dance Studios in London.

The brothers recently created, directed and choreographed the jukebox stage musical "Down Around Brown Town," celebrating the music of Mr. James Brown, performed in Los Angeles and New York. Along with being featured in Dance Mogul Magazine, Frit and Frat received the NAACP Theatre Award for Best Director of a Musical for “Down Around Brown Town”.

Remember the fun times of simpler days? Well, those days are back! Every day kids love exploring our campus trails, mastering scavenger hunts, and putting on talent shows. Each week is themed and filled with corresponding crafts, games and activities.

BIKING is a big part of Camp Ramona. Some Campers even learn to ride for the first time; while others are introduced to mountain biking. Our trails offer different levels of difficulty for all biking skill abilities. Children who would like to partake in riding can bring their own bikes to Camp where they will be stored in a secure location throughout their stay with us.

SWIMMING is an all-time favorite “cool” activity where our certified lifeguards and counselors keep a close eye on all our swimmers. The pool gradually slopes from shallow to deep with clear markings and floatation barriers that allow us to safely accommodate a variety of skill levels ranging from Beginner to Advanced. For non-swimmers or anyone just not in the mood for a dip, we always offer an array of fun activities in our gymnasium.

GAMES, we have so many! Board games, puzzles, LEGOS and more! Or for some outdoor action, there’s always tennis, basketball, hiking and biking. For the emerging artists we have arts and crafts, dance and few camp wide murals ready to be imagined.

DANCE with Frit & Frat offering two levels: Intro to dance where campers can tap into their creative energies and bring to life their inner artistic dancer. Beginner/Intermediate level where campers can explore the elements of ballet, contemporary and hip hop with a focus on technique and body awareness. Both levels will be able to share what they’ve learned in the Talent Show at the end of camp.

We offer both Half-day and Full- Day sessions along with weekday flexibility.

Please see our Registration page for weekly schedules and various programs and fees.

LUNCH AVAILABLE FOR PURCHASE
Optional hot lunch provided by Bevaris Alliance Food Service! Menus and registration information will be provided in May- hooray!

If there are any questions, please feel free to reach out to us at camp@ramonaconvent.org Thank you and we look forward to a fun, fantastic summer at Camp Ramona!